Over the number of months in Ukrainian and Bulgarian cities the presentation of a documentary film “Place of Power” directed by Tatiana Staneva telling about the history and culture of the village Krynychnoye (Chushmeli), Bolgradsky District, Odessa Region  has been taking place.

Back in December, at the premiere of the film, Tatiana Staneva mentioned that we have lost most of what we got from our ancestors who sacredly protected the history over 200 years. The film premiere is intended for us – the descendants.

The Chushmelian folk’s young descendants growing up in the age of computer information technology are no longer satisfied with the passive viewing of the films, but they strive for active managing the story through new interactive mechanisms conveying the viewer the ideas of the video films with the introduction of computer games.

It is this innovation amplified by impressions got from watching the documentary film that became the push to create a series of ethnographic computer games “Place of Power”, which was supported by the Nongovernment Organization “Bessarabia Development Center”. The mastermind for the computer game was another active Chushmeli-born,  Oksana Ryashchenko, a top-qualified  teacher of computer science of the school No.10 in Izmail, a teacher of the Danube branch of the Interregional Academy of Personnel Management, as well as a member of the Odessa team of international Erasmus + KA2 “GameHub: university-business cooperation in the game industry in Ukraine.

Oksana Ryashchenko considers project training the key component of this process. It is when the team of creators of such games consists of schoolchildren of the village, and a team of teachers is created, if possible, from the natives of the village experienced in creation of the computer games (teachers, students and geniuses studying in schools).

On April, 20 under support of the school management the first lesson for the village school boys and girls was held. The lecturers were Oksana Ryashchenko and Sergey Melnik, the doctor of philosophy and PhD in social communications, consultant on communication capabilities of computer games of the GameHub project. Oksana Ryashchenko presented her speech about the professions in the field of information technologies, their connection with the development of computer games. Sergey Melnik told about work with human motion control devices (Kinect) in the light of social and communicative experience on the example of virtual communication. At the end of the speech the schoolchildren were offered to play active games, which would be later supplemented with the elements of a computer game using human motion control devices. However, besides the experienced teachers, the village students met their former senior schoolmates Svyatoslav Volkov and Mikhail Penchev, the 1st year students of the Institute of Computer Systems of Odessa National Polytechnic University.

During several hours children explained and demonstrated the possibilities of Kinect+Scratch technology which could be used as the means of natural communication during computer game play. At that lesson the participants used methodical recommendations on development of the brain building computer games with the use of sensory technologies authored by Oksana Ryashchenko. 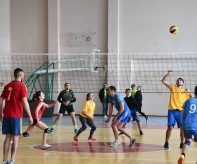