More than 60 participants attended the Conference, namely the representatives of higher educational institutions from different regions of Ukraine, State archives, museums, the Consul General of the Hellenic Republic in Odessa, the Director of the Greek Cultural Fund of Odessa, Members of “Hellas” Greek Society of Izmail and the guests from Romania and Moldova.

Assistance in the organization and holding of the conference was rendered by the well-known public figure of the region, a businessman, a patriot of the Bessarabia Territory, a co-founder of “Bessarabia Development Center” Public Organization, Mr. Victor Kurtiev.

The Rector of Izmail State University of Humanities, Professor Yaroslav Kichuk, General Consul of the Hellenic Republic in Odessa, Mr. Lieberopoulos Aleksios-Marios, Deputy Chairman of the Izmail City Council, Mr. Sergey Batkilin, the Director of the Greek Foundation of Culture in Odessa, Mr. Paradisopoulos Soforonys Ilias, a member of the board of “Helada” society in Izmail, Mrs. Yevgeniya Ivanova welcomed the participants to the conference. They stressed the necessity of such an event which enables exchanging experience in studying the topical issues of the contribution of the Greeks to the development of the North Black Sea, South Bessarabia, South Ukraine and the city of Izmail.

At the plenary session the book “Documents and materials to the history of Greeks of Southern Bessarabia” was presented. The authors of this book are the scientists of the University: Gypsienko, Drozdov and Chernaya. The book gives a start to the series “Historical and Cultural Heritage of Southern Bessarabia”. The first volume contains the documents from the National Archive of the Republic of Moldova and “Izmail Archive” communal institution, devoted to the history of the Greek ethnic community on the lands of our region of the period 1811-1977.

At the breakout sessions, about 50 papers were announced and discussed on the problems of the historical development of Greece, Ukrainian-Greek relations at different stages of history, the preservation of the Greek cultural heritage in Ukraine, the activities of the Greek national and cultural societies, debating issues of the history and humanities of the South of Ukraine. The presentations were made by: the Doctor of Historical Sciences, Professor, the Head of the Department of New and Modern History of Mechnikov Odessa National University, Mr. Demin, the Master of History, the Director of the Greek Culture Foundation in Odessa, Mr. Paradisopoulos Soforonis Ilias, the teachers of Izmail State University of Humanities: Drozdov, Tatarinov, Kolesnikov, Deljusto, Kudinova, Dzikovsky, Dizanova and others. The section “History of Greeks of Ukraine through the eyes of young researchers” was fruitful: the students and the masters of the University have acquainted the attendees with the achievements in the study of Greek cultural and historical heritage.

The Conference generated lively discussions and highlighted the relevance of the issues addressed at the conference and the need for further scientific research on the issues identified. 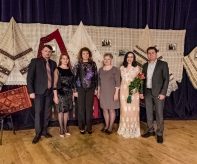 Sophia was conquered by the Bessarabian project
Comments: