Home • Culture • Sophia was conquered by the Bessarabian project

Sophia was conquered by the Bessarabian project

The capital of Bulgaria was the first foreign city “Place of Power” film was demonstrated in.  On March 29, under support of the Public Organization “Bessarabia Development Center” the guests from Ukrainian Bessarabia visited Sophia and were welcomed by Lumier Lidl Cinema House in the downtown.

The residents of the capital, Plovdiv, Kyustandil and other cities came to watch the film enthusiastically reviewed by the Ukrainian viewers in the media and on the Internet and meet its creators. It is not a surprise that owing to sincere feelings and thoughts shared by the authors of the film and filmmakers in the social networks the attention of the Bulgarians from both diaspora and archdiocese was attracted to the film so fast.

Needless to say that people who were born in Krynychnoe village but live in Sophia now came to see the native landscapes. Besides, many guests of honour visited the premiere, namely, the Vice President of the Republic of Bulgaria, Mrs. Illyana Yotova and the Ambassador Extraordinary and Plenipotentiary of Ukraine in the Republic of Bulgaria, Mr. Vitaliy Moskalenko. When addressing the audience they spoke about the importance of such projects and necessity to demonstrate the film to as many fellow citizens as possible so they could learn the history of the Bessarabian Bulgarians, evaluate the hard work of their grandfathers and were able to tell their children about that even in the context of the only one village. It is worth mentioning that no one stayed indifferent- both men’ and women’s eyes dewed with tears and even children were stunned by the picture.

Owing to support of the Public Organization “Bessarabia Development Center” 40 persons arrived to Bulgaria, namely, the film team, folk group “Fa-Diez BAND”, friends of the project, and representatives of Taurian Bulgarians – the descendants of Chushmelians settled more than a century ago in the Azov steppes. The guests from Ukraine presented two exhibitions. Mr. Alexander Baron demonstrated his philosophical pictures made during the filming and Mrs. Tatiana Yancheva-Dukova exhibited her numerous collection of ethnographic artifacts.

The PO “Center of Bessarabian Bulgarians in Bulgaria” made a surprise to everyone by inviting Mrs. Svetlana Kovtun born in Krynychnoe village but lived in Bulgaria for many years who sang a song inherited from her grandfather and made some guests cry. It is sad enough that our grandmas and grandpas left us forever. A minute of silence in honor of two heroes shown in the film but died before the premiere was given by the guests. At that moment every person was thinking about those who gave him life, his-identity and soul.

After the film and a concert program many people presented flowers and gifts and thanked the creators of the film for the emotions they experienced.

And it is quite logical that this year the first annual award from the “Center of Bessarabian Bulgarians in Bulgaria” was awarded to Mr. Victor Kurtiev, the benefactor of the whole large-scale creative project.

On the day after the premiere in the Ethnographic Museum there was a meeting at the “round table” organized by the “Rodolubets” friendship where the participants could express their feelings and emotions. Former director of the Bolgrad Gymnasium named afer Rakowski, Mrs. Zhanna Suslina, now living in Sofia, noted the host’s contribution: “Every effort has been made to demonstrate the film in the country of our ancestors but not just in one of the capitals of Europe.”Place of Power” film has warmed us with kindness, respect for history and emotional sensitivity”.

Tags
powerofplace
Next article in the section 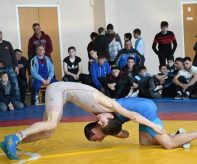