Home • Culture • «Place of Power» premier in the Kaspichane village

“Place of Power” premier in the Kaspichane village

There is a Bulgaria saying: “A man cannot get food from his roots but he suffers when he has no roots”. The creators of the “Place of Power” documentary think the same; since it is the primary spiritual foundation a person relies on through his whole life, it is impossible to become a figure having no roots.

The connection between the thousands of Bulgarians of proactive attitude living in different spots of the World led the Bulgarians-Chushmelians to the community of Kaspichan, located in the eastern part of the Shumen region. Kaspichan, a small town with a population of 3,500 people maximum and the nearby village having the same name, are the special places for the Bessarabian and Taurian Chushmelians. According to the surviving legends, in the beginning of the 19th century the ancestors left those places and moved to Bessarabia to found a colony where Krynychnoe village is now.

On 31 March, in a sacred place the soulful and exciting meeting caused a storm of emotion for everyone took place. Of course, the main part of the visit to the ancestral land was the demonstration of the film. Prior to it, Mrs. Tatiana Stanieva, a film director, focused the audience’s attention on the value of this historic meeting and on the wonderful opportunity to represent the results of the huge work by means of a documentary video tour of the past.

Needless to say about the emotions caused by the film, songs performed by “Fa-Diez BAND” and Zlatna Maria, the impressions the citizens of the Kaspichanoe village got from exhibitions of Alexander Baron and Tatyana Yancheva-Dukova! One woman in the hall was crying till the end of the film. Apparently, it was a kind of special catharsis for her… All participants of this historic family meeting will remember the warmth of the enthusiastic words and hugs for a very-very long time.

The citizens of the Kaspichanoe village, the representatives of Chushmeliy village who now live in Bessarabia and Tavria danced together the improvised khoro on stage until the end of the concert. That’s the soul of a Bulgarian! Wherever he hears the first sounds of the wild folk music, his feet starts dancing and his hands are intertwined as evidence of the unbroken spiritual bond of the Bulgarian ethnic group.

Mr. Victor Kurtiev, the sponsor of the trip and a co-founder of the “Bessarabia Development Center” Public Organization which financially and organizationally supported the film, promised that he would do everything possible to arrange for such meetings more frequently. This meeting could be the beginning of mutual assistance and close communication. Therefore, he invited former compatriots to participate in the construction of the museum in Krynychnoe village, which will be started this summer and leave a memorable mark in the life of the Bulgarian diaspora of Ukrainian Bessarabia.

Tags
powerofplace
Next article in the section 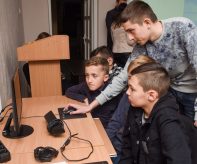