On 4 – 6 April in memory of Nikolai Myndru the 11th International Tournament on Free Wrestling was held in Kamenka village, Izmail district. About 180 participants arrived from five countries to fight for dominance in 11 weight categories. As a result of the Tournament, 7 out of 11 gold medals were won by the wrestlers from Kamenka village.

After the sports even in honor of Nikolai Myndru as a qualifying event, all-Ukrainian Championship will be held on 16-19 April in Donetsk City, which, in its turn, anticipates the European and World Championships. There were two age groups of athletes participated in the Tournament: the cadets (2002-2003) and the younger boys (2005-2007). The wrestlers came from Bulgaria (3 teams), Romania (1 team), Belarus (1 team) and Moldova (7 teams). Our country was represented by children from Zaporozhya, Nikolayev and Odessa Region (Belgorod-Dnestrov, Saratsk Artziz, Bolgrad, Tatarbunar, Tarutinsk and Izmail districts). The team from Kamenka village consisted of 23 pupils of the local sports school who participated in almost all weight categories.

The Tournament was traditionally initiated by the village leadership headed by Mr. Ivan Lefterov. The competition was sponsored by the Village Council, SCP “Progress” and Public Organization “Bessarabia Development Centre”. The guests (over 200) were accommodated in the Sports Palace.

Before the fights started, Mr. Ivan Lefterov, the Head of the village council, Mr. Alexander Urbansky, the Deputy of Parliament of Ukraine, Mr. Vadim Shkarovsky, the Deputy of Odessa regional council, Mr. Victor Kurtiev, a co-founder of “Bessarabia Development Center” PO, Mr. Petr Khadzhikov, the Deputy Head of Izmail DRO and Mr. Georgy Yabanzhishi, the senior wrestling coach of Kamenka Sports School, the master of sports of the former USSR and the honored coach of Ukraine wished young wrestlers to demonstrate the will to win. In addition, Mr. Victor Kurtiev stressed: “There is an Olympic principle:  It’s not the winning, it’s the taking part. I still believe that winning matters in life, and the desire to win matters. Today not everyone will win, but everyone should want to».

Mr. Lefterov noted that the international Tournament in honor of Nikolai Myndru has two goals: first of all, it is an opportunity to honor the name of the outstanding countryman who made a grateful mark in the hearts of people, and secondly, it is the popularization of the Bessarabian national sport and healthy lifestyle.

Medals and diplomas were awarded to the winners of this Competition. The judges were gratefully honored as well.

Tags
Bessarabia Odessa region
Next article in the section 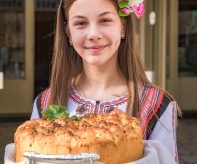 “Place of Power” premier in the Kaspichane village
Comments: