Home • Ecology • First results of the project Together we shall preserve the clean environment of our native shore!

First results of the project Together we shall preserve the clean environment of our native shore!

On April, 1, the project “Together we shall preserve the clean environment of our native shore!” was launched implemented by the “Bessarabia Development Centre” Public Organization in partnership with Horodne village council and financially supported by the Lion Society (Lviv, Ukraine) and financed by the National Endowment for Democracy (Washington DC, USA). The necessity of development and implementation of the project was caused by the environmental deterioration in the Odessa Region. Thus, the forests and woodlands have been destroyed over the past decade, soils and water resources polluted, and the region’s biodiversity destroyed hardheartedly.

Among the main causes of the negative phenomena associated with the deterioration of the environmental situation is the population’s negligent attitude towards the environment. At the same time, the piecemeal actions of local authorities and activists are not systematic and bring no effective results due to scarce funding on a residual basis and a lack of control over the state of the environment by both the authorities and the public. As the consequences of the negligent attitude towards environmental issues the economic situation in the region is deteriorated: agriculture, which is the basis of economic growth in the region, suffers from drought; water resources decrease, hence, fish capture reduces followed by the income decreases, and the sickness rate of the average village increases.

The Horodne Territorial Community composed of the villages of Dmytryvka, Horodne, Novy Troyany and Oleksandrivka faced with all the said above.  The community’s environmental issues to be immediately solved include introducing new methods of solid waste management and combating unauthorised dumpsites; reforestation damaged by fire in 2018; source clearing feeding the Big Katlabukh River dying from drought and people’s negligence. Addressing these issues is impossible without developing an environmental protection strategy and profile programme.

The objectives of the project are:

The project had a direct impact on the environment preservation. For example, during implementation, 225 seedlings of Crimean pine were planted, the eco-activists of Oleksandrivka village besides creating a map of environmental issues jointly with the village council held environmental actions to eliminate the unauthorized dumps.

However, in order to solve the environmental issues the main activity of the project focused on the involvement of the Public Organizations, namely public self-organisation bodies, school self-government, community organisations, and eco-activists. In the framework of the project, two trainings on preparation of local environmental ambassadors were organised. During the last months, these ambassadors, together with the local authorities and Public Organizations, have been developing an integrated programme on environmental protection, efficient use of natural resources and ensuring environmental safety of Horodne Village Council for 2021-2025.

In Horodne Territorial Community, with the help of community activists a sociological pool was conducted aimed at finding out the residents’ opinions on major environmental issues of the community and ways to solve them. This allowed identifying the “top five” of environmental issues that have become the key to the development of an integrated programme of environmental protection, sustainable use of natural resources and environmental safety of Horodne Village Council in 2021 – 2025. The draft programme has been prepared and is currently being discussed. It is planned that the programme will be adopted at the session of Horodne Village Council by the end of June of this year.

The implementation of the project “Together we shall preserve the clean environment of our native shore!” allowed not only to solve the key issues, but also to unite people and to make them believe that the united community can do much more useful for their native villages. 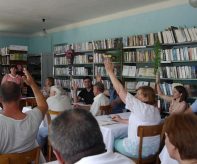 End of the project “Together we shall preserve the clean environment of our native shore!”
Comments: