On January 15, a delegation led by the General Secretary of the Association of European Border Regions, Mr. Martin Guillermo Ramirez, arrived in Ukraine in order to visit the “Container terminal of Odessa” enterprise. The purpose of the visit was to get acquainted with the capabilities of the terminal – the leader of the container market of Ukraine, which is a subsidiary of the German HHLA, and to discuss the possibility of investing in its infrastructure.

European guests visited the Quarantine Mall and asked the company representatives questions.  After that, the guests and the hostess moved to the Port Hall to go ahead with communication.

The members of the delegation spoke with the head of the Odessa seaport, Mr. Ruslan Sahautdinov. They wanted to hear his opinions on the prospects for transport on the Danube.

Mr. Ruslan Sahautdinov said: “In terms of transport infrastructure, the maritime transport predominates in the Odessa region, 95 per cent of which is linked to maritime transport rather than combined transport. But we know that in the Western countries, where infrastructure is developed, in terms of ecology, as well as of the maintenance of roads, and taking into account economic feasibility, the State is giving serious attention to the development of river transport. But in Ukraine we actually see that the level of development of the combined transport (river-sea) is insufficient. I believe that cooperation and coordination among the various organizations and enterprises involved in the water transport industry provides a great opportunity for action.”

In recent years, Ukraine has been the World’s first grain exporter. The port authorities and the stevedoring companies have prepared a special program to strengthen grain capacities. Thus, the port will be able to prove 7 million tons of grain transhipment per year. To date, the project has been implemented at almost 80 per cent and will be completed before the end of the year.

The port officers also plan to complete the reconstruction of Pier No.7, which includes dredging. The design length of the upgraded structure will be 386.5 m, the depth 13.5 m, and the loading capacity will be doubled to reach almost 2 million tons per year. To date, the project has been implemented at 35-40%.

Relating to the question of Mr. Martin Ramirez about the ecological component of the activity of the Odessa seaport, it was reported that the ore cargoes are now being handled on the territory of the port “Yuzhny”, and Odessa ports are engaged in the transhipment of exclusively environmentally friendly cargoes, which in turn improved the environmental performance of the port. In the near future, the port’s Management is planning to switch to alternative energy sources, in particular to solar energy.

Odessa dockworkers intend to ramp up the transhipment capacity of the enterprise in several times, however the present limitation, namely the lack of the appropriate infrastructure of access roads and railways, will not still be eliminated. To fix this problem the enormous resources are required which are not available at the State. In this case the cross-border investments will be needed. And for this reasons the port authorities had a discussion with the Secretary-General of AEBR, Mr. Martin Ramirez, regarding attraction of the said investments. 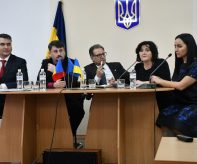