On Monday, 13 January, at the invitation of “Bessarabia Development Center” Public Organization, the General Secretary of the Association of European Border Regions Mr. Martin Guillermo Ramerez arrived in Ukraine. On Tuesday, the delegation visited the Odessa Regional Council, where there was a meeting with Mr. Yuri Dimchoglo, the First Deputy Chairman of the Odessa Regional Council, Mr. Yuri Maslov, the Head of the Deputy Group “Strategy of the European Union in the Danube region”, as well as the Head of the Department of Economy, Budget, Investment and International Cooperation of the Office of the Regional Council, Mrs. Irena Nedemyanova

Mr. Yuri Dimchoglo told the guests about the peculiarities of Odessa region and drew their attention to the fact that there is already quite a large experience in cooperation with European regions. The Odessa region is a member and a founder of several inter-European associations, the most important of which is the “Lower Danube” Euroregion. Until recently, Odessa Region presided over it, and this year the powers of the leadership were transferred to Kagulu.

Mr. Yuri Dimchoglo said: “For us, for the years to come, the participation in real projects that will enhance the development of the Odessa region is a priority. I am glad that Mr. Victor Kurtiev, who is a patriot of his country, is here in this room. After all not all businessmen are patriotic, able to think big and not just for their own profit. This person showed that his projects, both social and cultural, have already become a rule, that they are not one-off projects. This is important”.

The Deputy, Mr. Yuri Maslov recalled that the length of the Danube River is 2.860 km and the last 180 km runs through Ukraine. This is the immediate border with the EU.

He said: “Unfortunately, we have not yet achieved an equivalent partnership in European cross-border cooperation. One of the vectors of cooperation is the transboundary partnership – the Danube Strategy. In Ukraine, Odessa, Chernivtsi, Ivano-Frankivsk and Zakarpattia Regions participate in the implementation of the Danube Strategy. And four regional councils signed a memorandum establishing the Association. However, the Odessa Region Council was the only one to take a formal decision to approve the plan of European Union on DS implementation. This happened in 2017. A number of the Danube Strategy projects have already been implemented. But many of them still require serious attention. The project on saving the Danube lakes is the one of those projects”.

In response to the information provided, the guest from Europe agreed that the funding that was channeled through the non-EU programs was indeed not very substantial. In particular, this is because the donor attention has so far been focused mainly on the EU’s internal borders. In the new phase, there is an intention to redesigning programmes that can be applied to external border regions.

He said: “We believe that we will be able to develop programmes for the border regions in order to make them more attractive. This will allow for good investments in major projects such as renewable energy, infrastructure and transport.”

At the end of the communication, the parties were a unit and agreed that such meetings should become regular in order to better understand each other and to have more effective collaboration. 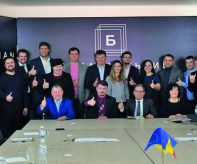 A delegation of the representatives of the Association of European Border Regions (AEBR) visited Izmail
Comments: