On March 10, Ismail State University of Humanities was visited by a Hollywood star, a martial arts legend, fadeless Cynthia Rothrock. In the conference hall of the University «the Thumbelina with steel character» was welcomed by the athletes came from different parts of Bessarabia, the admirers of her talent and the newsmen. The American guest was honoured with bread and salt according to the custom of Bessarabian hospitality.

Cynthia Rothrock was introduced by the Professor and the Rector of ISUH, Mr. Yaroslav Kichu who, stressed that owing to invitation of such professional masters of sports and organization of the international festivals of Eastern martial arts, the University will be able to prepare coaches-teachers specialized in martial arts – a very popular sport in the Danube Region.

Victor Kurtiev, a founder of the Public Organization “Bessarabia Development Center” and a sponsor of this event, noted that many generations have grown up watching the films with Cynthia Rothrock. In the former Soviet Union, the films with Chuck Norris, Van Damme and Cynthia Rothrock were glamourous. People watched those moves in the video parlours, copied and handed them from one to another. And the arrival of a legendary person, an icon of the epoch is an outstanding event for the citizens of Izmail. “We believed that meeting would be useful for the schools of martial arts supported by us in Bessarabia. In a half a year or so, in September, another event is going to take place – we are going to invite Cynthia again with her friends, who are not less popular. We promise to keep on creating the powerful “magnet” in Bessarabia – the “magnet” drawing people, resources, means, ideas and everything else which can make us meaningful in the World.

Despite her physical fragility, Cynthia is in fact a first-class martial artist who has made herself and her own destiny. For five consecutive years, she was a middleweight kickboxing champion. As a famous film actress confessed, she began to practice martial arts at the age of 13 influenced by her friends. At the beginning of her career she had to compete against men because there were no worthy rivals among women. The actress is proficient in weapons such as broad two-ends Chinese sword, a sixth, a nine-parts Chinese steel whip chain, a Chinese metal fan, and a Japanese firearm. Mrs. Rothrock was inducted into the Hollywood Martial Arts Hall of Fame. She was awarded the CrystalAward (which is like “Oscar” in the sports world) for popularization of martial arts in the media.

Unfortunately, Cynthia Rothrock’s leading blow, demonstrating her extraordinary flexibility (a heel hits the forehead of an opponent when he/she is being captured from the front, the so-called dragon tail. -ed.) was not demonstrated at the closed martial arts seminar. The movie star thought it would be too painful.

Kung Fu Queen, who mostly acted the brave girls who could stand up for themselves, is still fearful. To overcome the fear, Cynthia is fond of extreme sports (ballooning, high jumping, mountaineering).

Cynthia began filming in Hong Kong. Her first film was the “Shanghai Express”. Hong Kong stars – Samo Hun and Yuen Biao were filming as well. She was cast in the role for which a male actor from the USA was predicted. Cynthia was so loved by the film’s creators that the script was amended. Rothrock was the first actress from the West to appear in a Hong Kong action film. In Hong Kong she spent five years continuing acting in the films produced by Sammo Hung. Only accident prevented Cynthia from acting with Jackie Chan in the film “Armor of God”.

At the press conference in Ismail, Cynthia smiled back at those years of her film career: “In Hong Kong, I suffered a lot of injuries: broken teeth, swollen nose, broken fingers. But thanks to this period I became particularly strong”.
Despite the steel «envelope», Cynthia Rothrock is very sensitive and even sentimental just like any other woman. Her date of birth is 8 March. Recalling the Birth Day gifts received during her lifetime, an American guest said that her most memorable present was a postcard made by her daughter, which she still keeps and holds on a Christmas tree. “Bessarabia Development Center” also congratulated Cynthia Rothrock with her birthday, having organized a banquet in her honor in the “Bessarabia” hotel, where “Fa-Diez BAND ” folk group from Odessa performed.

This is Cynthia’s first visit to Ukraine. Besides Izmail, the actress also visited Yuzhnoukrainsk (Nikolayev Region) and Odessa, where she held two master classes in martial arts.
At the press conference, the guest noted that sometimes she feels lonely when travelling. However, she was conquered by our people who gave her their love and kindness.

Tags
CynthiaRothrock
Next article in the section 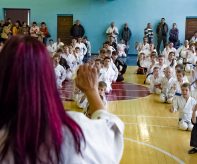 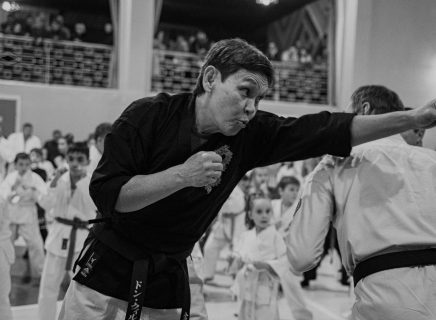 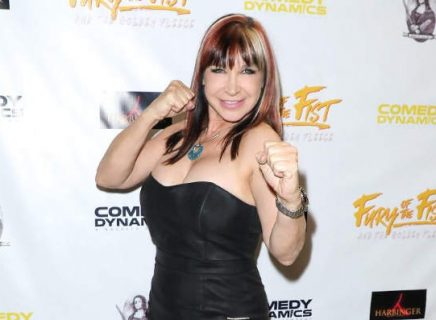