On September 29, the natives of Krynychoe village once again reminded about themselves in the capital of their ancestral homeland. Within the framework of Sofia biting docs film festival, “Place of power” film of the native of Krynychnoe village, a director, Mrs. Tatiana Stanieva was represented. This is the second film demonstration in Sofia which has been premiered six months ago, on 29 March, at Lumiere Lidl Cinema. The PO “Besarabia Development Center” and “Center of Bessarabian Bulgarians in Bulgaria” were the organizers of the event.

The authors from Bulgaria, Germany, Spain, Switzerland, Argentina, India, France, Slovenia, Canada, Italy and Ukraine presented their works at Sofia biting docs. In total, 12 films were submitted. Mrs. Tatiana Stanieva was the only director representing our country. As a filmmaker, she participated in such an event for the first time.

Besides Mrs. Tatiana Stanieva, Mr. Jan Leluk, a cinematographer and Mrs.Tatiana Dotsenko, a translator of credits came to Sofia as the members of the creative group of “Place of Power” film. The trip to the film festival was financed by the film’s production partner, the PO “Bessarabia Development Center”.

Four days before the film, Mrs. Tatiana Stanieva was interviewed by six TV- and two radio-channels in Sofia. She spoke about the making-of, the towns it was and will be demonstrated. The director also described her new project, which has had recently begun.

“Place of Power” film was shown in the “House of Cinema” in Sofia and once again brought together people who cherish the traditions of their ancestors, respect the roots and culture of their people. Some people came from other towns to watch the film; some came for a second time and called it “therapy session”. Mr. Ruslan Maynov, a native of Bessarabia (Orekhovka village, Bolgrad district) and a famous Bulgarian actor also was present in the hall.

Before starting the film, the director was speaking about importance of preserving the Bulgarian villages, since more and more people leave them.

“Place of Power” film was made last year in Krynychnoe village, Bolgrad district and the citizens of that village became the characters of the film. The key idea is to show the traditions of people lived in Chushmeli village, their crafts, industriousness and the desire to preserve the family seat. From the very first frame up to the last one the audience’s attention was kept. During two hours, the viewer experienced many different emotions; tears appeared on people’s faces, smiles blossomed, laughter was occasionally heard in the audience because besides the tragic moments about the difficult life of the villagers, comic episodes were shown.

At the end of the film, Mrs. Tatiana Stanieva answered the audience’s questions and listened to their reviews. An elderly woman, moved by the film, gave a hand-kiss to the author for her love to her people.

When staying in Sofia, Mrs. Tatiana Stanieva received the requests from the directors of TV channels on broadcasting her film on television. But as long as the film is set to the festivals, this is not allowed. However, preliminary discussions on facilitating the broadcasting on central BNT have already taken place with the Ukrainian Embassy. According to Tatiana, all citizens of Bulgaria will be able to watch the film in the nearest future. Next time it will be demonstrated in Silvermarket at the Ihlawa festival in the Czech Republic.

Tags
Ishmael powerofplace
Next article in the section 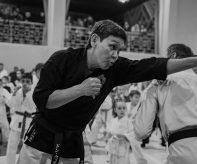